LIFTING THE VEIL : BEHIND THE INFINITE ILLUMINATION HEALING LOGO 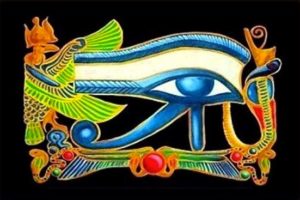 LIFTING THE VEIL : BEHIND THE INFINITE ILLUMINATION HEALING LOGO

The Infinite Illumination Healing (IIH) logo has 3 main elements – 1) the infinity symbol; 2) the eye of Horus/Heru; and 3) the Egyptian blue lotus.

INFINITY SYMBOL – The infinity symbol was originally known as the Lemniscate, meaning “ribbon,” by the ancient Greeks and stemmed from the ancient Egyptian iconographic symbol, the ouroboros, depicting a serpent biting its own tail. The ouroboros was adopted as a symbol in Gnosticism, Hermeticism, and most notably in alchemy. The infinity symbol/ouroboros represents the infinite immortality, continuity, eternal return, and the infinite cycle of nature’s endless creation and destruction, life and death.

EYE OF HORUS/HERU – The eye of Horus/Heru is an ancient Egyptian symbol of protection, royal power, and good health.

In one myth, when Set and Horus/Heru were fighting for the throne after Osiris’ death, Set gouged out Horus’/Heru’s eye. The majority of the eye was restored by either Hathor or Thoth (with the last portion possibly being supplied magically). After Horus’/Heru’s eye was restored, Horus/Heru offered it to his father, Osiris, in hopes of restoring his life. Thus, the eye of Horus/Heru was often used to symbolize sacrifice, healing, restoration, and protection.

As depicted in the IIH logo, the teardrop portion of the symbol is colored red to represent Horus’/Heru’s blood when his eye was gouged out by Set. The use of red also loosely symbolizes the use of carnelian or red-orange coloring throughout ancient Egyptian jewelry and art. Moreover, the dark blue eye in the IIH logo symbolizes the use of lapis lazuli in ancient Egyptian jewelry and also symbolizes the blue color of many protective amulets found around the world to ward off the “evil eye,” a curse believed to be cast by a malevolent glare.

EGYPTIAN BLUE LOTUS – For over 3,000 years, the blue lotus was used by the ancient Egyptian priesthood for its medicinal properties and as a spiritual sacrament. The blue lotus generally produces mild psychoactive effects that are purported to have a “divine” essence, which is said to produce a subtle, high-level, expanded state of consciousness that may have been used in ceremonial meditation and magic.

Perhaps the most well-known role of the blue lotus in ancient Egyptian art is its representation of the Sun’s daily movement in the sky. The ‪blue lotus‬ rises out of the water, like the sun at dawn, flowers in the morning to late afternoon, only to later sink below the water’s surface, like the sun at dusk.

As depicted in the IIH logo, the use of the dark blue and gold colorings in the blue lotus symbolize the use of lapis lazuli and gold throughout ancient Egyptian jewelry and art.

Please send a message to inquire about services, pricing, packages, or call/text 323-905-4774 for more information.